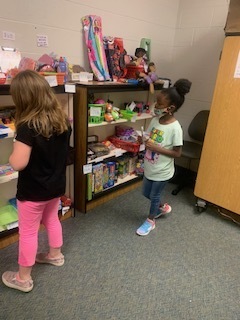 As shopping season gears up with the arrival of the holidays, students at Marion Math, Science & Technology Magnet are getting in the shopping spirit in their very own way.

It’s called the “PBIS Store.” The program is designed to recognize students for making positive behavior choices throughout the school year. Whenever a teacher observes a student making good choices – “living the MST Way” to the highest level – the student is rewarded with a “Patriot Buck.” At selected times in the school year, students are allowed to use their Patriot Bucks to shop at the PBIS Store, which offers everything from snacks and school supplies to small toys and board games.

The “MST Way” is a behavioral rubric that forms the core of the school culture at MST. It includes a list of expected conduct in the classroom, the hallway, the bathroom, the cafeteria, the playground, the bus, and during arrival/dismissal. Students are called upon to Make smart choices (M), Show respect (S), and Take responsibility (T).

“When we first told students about the idea they were not very excited,” admitted school counselor Lydia Archibald. “It was just something else to add to the MST Way and other policies and procedures we have here. But the day they went to the store and saw all the items they could purchase with their bucks, their faces lit up and they became very excited to earn the bucks.”

The program is organized by school counselor Lydia Archibald and a team of other MST teachers including Shannon Banks, Alexia Bratton, and Brandi Cheers. Archibald said the program was inspired by a similar program created by Elizabeth Gill, who now teaches at Marion Junior High.

Not only does the store create an incentive for positive behavior, but it also provides some valuable life lessons. Students are responsible for keeping track of their Patriot Bucks and deciding how to budget them. Archibald recalled a third-grade student who set a goal of earning a certain amount of Patriot Bucks. At the end of the nine weeks, he came to her with a big smile on his face, saying, “Mrs. Archibald, I met my goal for the nine weeks. I earned all my Patriot Bucks I wanted.” Other times, Archibald said students have opted not to buy anything during a visit to the store, working instead to save their bucks for a later visit, when they could purchase a bigger-ticket item.

“They learned that saving is sometimes better than spending,” Archibald said.

This is one of the most rewarding aspects of the program for Archibald. As a school counselor, she sees the struggles students face every day and the need for coping strategies to handle those difficulties. The school’s PBIS program provides much-needed support, she said.

“Sometimes the expectation to teach these coping skills lies solely with the school counselor, but PBIS shows that every person in the building, from the administrators to the cafeteria workers, plays a part in teaching students,” Archibald said. “As the old saying goes, it takes a village to raise a family; it takes that same village to teach students.”

In keeping with the “village” theme, MST’s PBIS program is not just for students. The school also has a staff store. Staff members can give bucks to each other, and they get to shop for items too.

“I would say despite the pressures this year is bringing to students, teachers, and staff members, the overall morale at MST is positive,” Archibald said. “I believe that this program had a hand in making what was handed to us with Covid -- a difficult situation -- into something that is manageable and positive for our students and staff.”