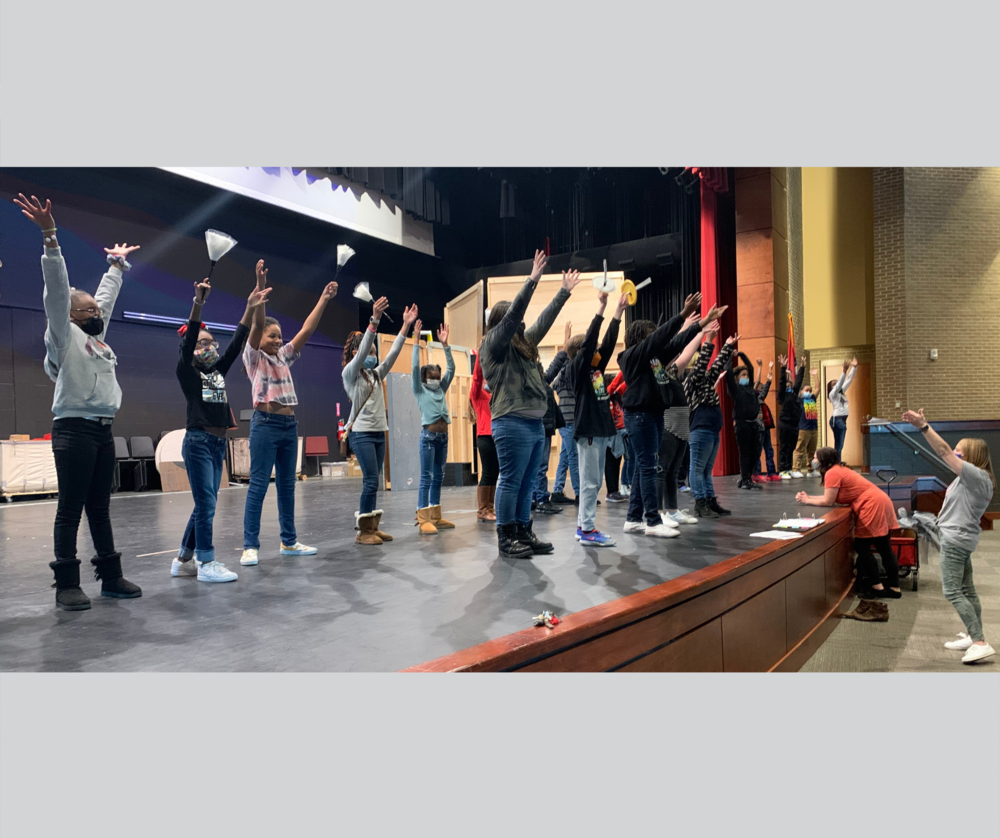 When the Marion Visual & Performing Arts Magnet production of “Beauty and the Beast” takes the stage of the Marion Performing Arts Center on March 4-5, it is sure to be a spectacle to see. There will be a fantastic set, amazing costumes, and top-rate sound. There will be seats full of parents and patrons, rich orchestrations, and coordinated choreography. There will be props and lights and curtains and applause. Most of all, there will be dozens of students, each getting an incredible experience as part of a professional-level theatric production.

But not much of that is happening yet. Right now, the show is still a work in progress. The young actors are perfecting their lines and learning where to go on stage. The dedicated directors are refining the dance moves. Sets are being painted and props are being built. An endless list of details is still being completed.

But that’s the way it goes in theater, said Brandy Allison, the school’s programs director, and one of several staff members leading the production. The show is a work in progress, and the process is as important as the end result. Everything about it is a learning experience.

“It’s exciting to see the pieces come together,” Allison said. “With weather-related school closures, we missed some rehearsal time, but our kids are resilient and are putting in extra time on their own to make sure the show comes together. Since our school isn’t located close to the Performing Arts Center, it’s always a worry for us that our students will have trouble hitting their cues for entrance and exits during the show. Luckily, we have a very supportive administration that sees the value in the process of putting together a production and is allowing us the time we need to make sure this show is successful.”

Allison is one of the show’s musical directors, along with VPA music teacher Barry Bates. Whitney Hall is the director of the production, and Studio Gray has handled all the choreography. Art teacher Courtney Shumock and her set design classes are helping with some of the sets, along with parent volunteers Jason Johnson and Nolan Martin. Ruthie Elliott, a senior at Marion High School, is the stage manager.

On a recent evening at the Performing Arts Center, Allison and Hall can be seen and heard helping students prepare for the production. They guide the students to their proper position on the stage, describing where set pieces will be, and handing out costume pieces and props for students to get familiar with. There’s a lot of moving pieces to manage. “I hope you are backstage listening and not playing,” the directors can be heard saying, in various variations, throughout the rehearsal.

“Our students are learning teamwork through this production,” Allison said. “They have to rely on each other because once the lights are up and the show starts, they only have each other on that stage to ensure the show continues to run smoothly. The students have to use problem-solving skills to work through any problems that arise on the stage. It is always interesting to see how the students work under pressure and work together to get those problems solved so the show continues.”

“Beauty and the Beast” will be one of the school’s showcase productions for this school year. As a visual and performing arts school, VPA weaves visual arts, dance, drama, and music into the curriculum, helping students cultivate skills in time management, teamwork, problem-solving, and effective communication.

Last year, because of the pandemic, the school couldn’t put on a full-scale production. Both Allison and Hall said being able to return to this type of production has changed the whole atmosphere of the campus. Students are more motivated than before. VPA students thrive on being able to express themselves through different creative outlets, they said, and the entire educational experience has improved.

“The benefits of theater carry our students throughout their futures,” Hall said. “Producing a show of this capacity is a lot of responsibility and hard work. Our students are developing more reading fluency through reading their scripts -- they don't even realize how much they are reading because it’s presented in a way that is motivating for them. Our students are expected to sing, act, and dance all at the same time. It can be very challenging physically. Every year we are so humbled to see the changes in our students as a result of being involved in the production. The camaraderie and positivity radiate from them.”

VPA students are involved in every facet of the production. Some are on stage, acting, singing, and dancing. Others are involved in helping make the set pieces. One student, fourth-grader Tyler Martin, will run the lights during the show, while sixth-grader Kimberly Curne will be the student director. The cast and crew reflect a cross-section of the entire student body. There’s even some high school students pitching in -- creating set pieces and painting flats as part of their set design class.

Some of the students involved shared their perspectives on the show:

“I’m excited, but also nervous, because I might mess up. But mostly I’m excited,” said sixth-grader Kaitlyn Griggs, who will portray Mrs. Potts. “The hardest part is probably remembering lines. The songs are easy. If songs were all I had to remember, it would be a lot easier. I’ve never been in a theatric production before. I’ve watched plays for a while, but now I get to be in one and really learn how the theater works. It’s a great experience.”

“I’m excited,” said sixth-grader Watson Allison, who portrays Lumiere. “The hardest part is memorizing. I practice by reading lines at school and at home with my mother. I’ve also practiced my lines a lot with the other ‘enchanted objects.’ I like having songs to myself. ‘Be Our Guest’ is my favorite because it’s my own song. It’s bigger, and it’s dedicated to me.”

“This is my first play,” said fifth-grader Zhabi Hubbard, who will play Madame de la Grande Bouche. “I’m excited because there were like 100 people trying out, and I was one of the ones picked. Being in a play helps you build self-confidence because you get to sing and dance in front of people.”

“Beauty and the Beast” will take the stage of the Marion Performing Arts Center at 6:30 p.m. Friday, March 4, and 4:30 p.m. Saturday, March 5. Tickets are $5 and can be purchased at the school, at the door, or by contacting Whitney Hall at whall@msd3.org.

The entire cast and crew are as follows: