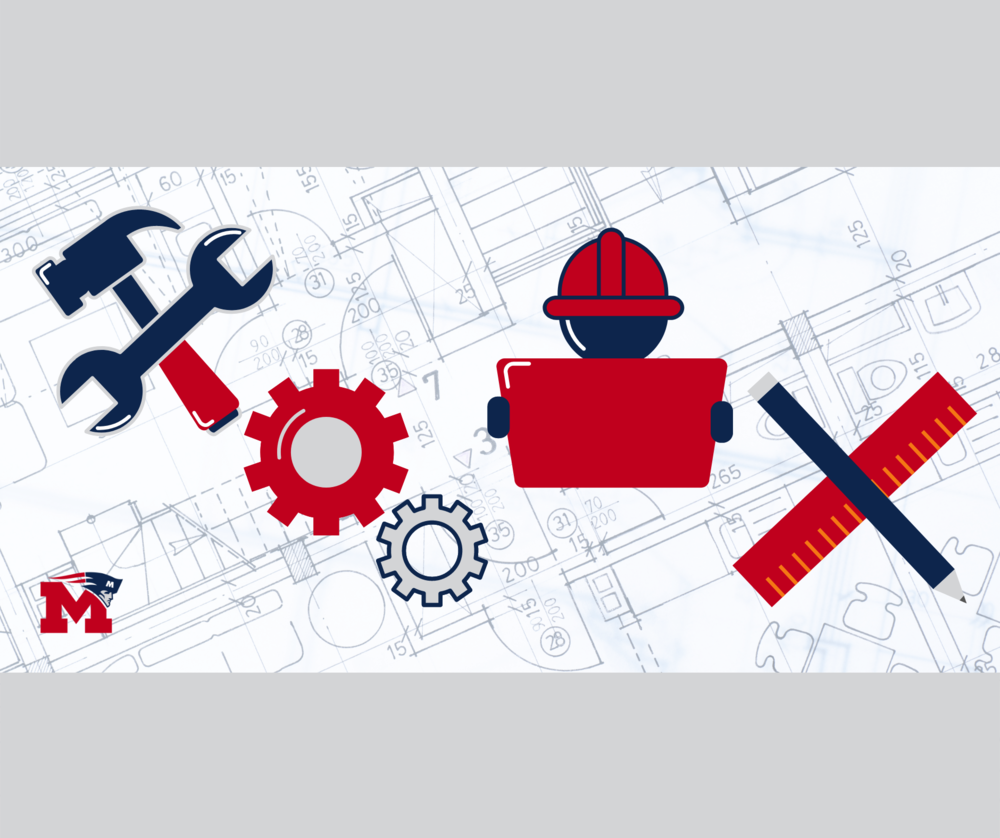 NOTE: The following is a history of the Marion High School Construction Technology program, written by Patrick Davis, who recently retired after 36 years with the district. Much of the history was told to Davis by former Marion Superintendent Herbert Carter, to whom this article is dedicated.

Marion High School has provided for students interested in industrial arts for over 80 years. Industrial Arts was taught at Marion in 1930 by a man named Mr. Vickerie, who ran a good tight program. The program was taught in the basement of the old three-story building that was torn down and is now Herbert Carter Global Community Magnet. The basement shop had limited footage and little headroom, due to the boiler piping. The completion of the district's new gymnasium across the street from the school building in 1938-39 gave the program room with adequate space, better lighting, and ventilation. The district purchased quality equipment such as lathes, planers, and joiners in the program's new space. In 1956, James Herbert Carter, attending college in Fort Smith, was hired to teach the program. Mr. Carter was offered the job by Marion School District Superintendent L.P. Mann for $3,200 a year. He said, “Nobody but coaches made that kind of money!” The program had taken a decline since Mr. Vickerie had left, but Mr. Carter was young and excited about his new career. He began making classroom tables and stools using the saws, lathes, and other equipment in the shop. He added drafting and technical drawing as part of the program's curriculum, building the drawing boards and purchasing T-squares and textbooks as they went along.

The program went very well until Mr. Mann, Marion’s superintendent, fell very ill as school began to open in 1961. It became obvious that Mr. Mann, who had suffered a stroke, would not be able to return to his office. A decision was made to ask Herbert Carter if he thought he could fulfill the role of superintendent. He said he could, and he did, and remained superintendent for many years, attending administrative classes in the summer. Mr. Carter filled two roles as he stepped up as superintendent -- the district's superintendent and the high school principal. School started, and the immediate need was to fill the position of an Industrial Arts instructor. Most who graduated with a degree that would allow them to teach this program went into engineering, and it became difficult to find a teacher for the program. In the late ‘60s, one Sunday morning, Mr. Carter sat reading the paper and stumbled upon an article concerning a “building trades” program just outside of Memphis. The article described the high school program as actually building houses and other projects. The thought inspired Mr. Carter, who actually drove out to meet and talk with those involved in this program. He then returned to Marion and addressed the school board and convinced them to change the program from “Industrial Arts” to “Building Trades.” With that, the Building Trades program was born in Marion.

The requirements for an instructor for this program were quite different from that of industrial arts, which made it easier to find instructors for the program. Nine hours of organization and planning, along with competency testing, which validated the vast knowledge and content of one's trade area. Many teachers have come and gone and left their marks on the program and helped develop it. I went through two years of the program in 1977 and 1978. My sophomore instructor, Mr. Howard, was a brick mason by trade, and he taught drafting and mechanical drawing skills and masonry skills and techniques. I loved his class so much that I began drafting floor plans on a small art table at home. My junior instructor was less than enthusiastic about the program and provided little instruction; near the year's end, he resigned or was replaced. A deacon from our church, Bro. Allen McCoy got me a job working for Heath and House Construction, where he was a job superintendent. I worked there my sophomore summer and my junior summer. I could not get enough! In my senior year, I was in the CCE work program and was released at lunch each day and headed straight to the job site! The week of my graduation, we left for Liberal, Kan., where we completed the construction of a Best Western Motel. When I returned, I worked with various construction companies and types of construction -- residential construction, commercial construction, and even some “tilt-wall'' construction -- and also with my mentor, “Bro. Allen” as I called him. Mr. McCoy even taught this program for three years. During his years, the original baseball press box was built. After he retired and went back into the construction business, I applied for the position but was considered too young, and William Criswell was hired as the instructor for the program.

After another three years, Mr. Criswell retired, and I applied again with my mentor’s (Allen McCoy) recommendation. I was hired in the fall of 1986, and they have let me hang around ever since. In my first year, the Building Trades program was on the east side of the gymnasium (Hot Box). That year we built a house for Jay Gamblin as the previous programs had. Mr. Gamblin was a house mover and he bought the houses and moved them near the ASU campus and rented them out to college students. The house was built about where the field house stands now. At the same time, the construction of the new Junior High School (now known as the North Annex) was taking place, and our shop space would be needed for athletics the next year, so arrangements were made for the program to return to the gymnasium on Military Road where it had been years ago. Students were bussed back and forth for each class, and we had vastly more space and a separate classroom. The program existed there for 12 years. At one time, our classes traveled in the Marion area, building storage buildings and garages for several years. Then, around 1999, plans were made to construct a 50x80 metal building for the construction program and return it to the high school campus. The slab, frame, and exterior were finished about the time school started, and soon the program began the interior construction of the building. Walls, insulation, plumbing, electrical, HVAC, and drywall flooring all came together during that year. We finally had a place of our own!

Many things have taken place in the last 36 years -- so many projects, accomplishments, contests, district and community projects, and activities have been completed. Marion Construction Technology has been a certified program by the Associated General Contractors in the past and is currently certified by the National Center for Construction Education and Research. We have students in trades and occupations everywhere. We have been actively participating in the SkillsUSA Organization for many years and won state championships five times -- four times in plumbing and once in electrical wiring -- along with seven runner-up medals and 12 third-place medals. These medals were in one of the following competitions: plumbing, carpentry, cabinet-making, bricklaying, and job skill demonstration. We also competed in the AGC Arkansas State Fair Invitational Carpentry Championships for six years against 18 schools, never placing less than sixth and placing second in the last year. I’ve heard it said, “Find something you love doing, and you will never work a day in your life.” With the Lord’s help and my mentor’s, I did just that! For 36 years, I have been getting paid to do what I love -- teaching construction and trades to young people. There is nothing like the twinkle in a kid's eye when they see what they can accomplish if they put their mind to it. When they stop, look and say, “I did that, and it looks good!” That is my satisfaction, my joy, and my happiness to see them smile with that little sense of pride and satisfaction. It doesn't get much better than that -- except for having grandkids!